The Vice of Luxury 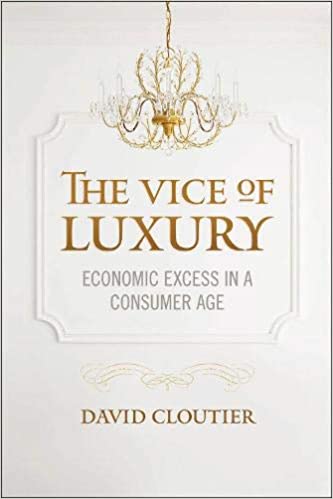 The Vice of Luxury

Luxury. The word alone conjures up visions of attractive, desirable lifestyle choices, yet luxury also faces criticism as a moral vice harmful to both the self and society. Engaging ideas from business, marketing, and economics, The Vice of Luxury takes on the challenging task of naming how much is too much in today's consumer-oriented society.

David Cloutier's critique goes to the heart of a fundamental contradiction. Though overconsumption and materialism make us uneasy, they also seem inevitable in advanced economies. Current studies of economic ethics focus on the structural problems of poverty, of international trade, of workers' rights―but rarely, if ever, do such studies speak directly to the excesses of the wealthy, including the middle classes of advanced economies. Cloutier proposes a new approach to economic ethics that focuses attention on our everyday economic choices. He shows why luxury is a problem, explains how to identify what counts as the vice of luxury today, and develops an ethic of consumption that is grounded in Christian moral convictions.

We must, [Cloutier] argues compellingly, recognize luxury as a vice and confront our propensity toward excess if we are to overcome the inequalities that plague our society and move closer to the kingdom of God.
-Christian Century

A must read for people who are dissatisfied with what they possess. Instead of seeking for more, and more satisfying consumption, this book suggests limiting and voluntary reduction of consumption.
-Consumption Markets and Culture

An achievement of the highest order ... This book should find its way into the hands of anyone who is seriously concerned with Catholic social doctrine.
-National Catholic Reporter

Cloutier is a first-class intellectual who delves into the realm of ideas with ease and insight... This review has not done Cloutier's book justice. His treatment of reciprocity and gratuitousness, the need for a morality that is intrinsic to our economic decision-making, and his detailed debunking of dominant economic ideology is so extraordinarily well done, I cannot recommend this book enough. It should not only change the conversation in Catholic social teaching circles, but represents a challenge, a thoughtful, precise challenge, to contemporary economics. Cloutier ... has delivered a masterpiece of Catholic thought.
-National Catholic Reporter

Rises to the challenge of taking on a difficult and neglected topic... Astonishingly thorough.
-Catholic Books Review