AAAS Reaches Out to Theology Students

Many Americans turn to religious leaders with questions about science and its implications, yet clergy members often have little exposure to science in their training. AAAS has taken the lead, based on years of planning, in addressing this conundrum by organizing the Science for Seminaries program, with a pilot project launched in 2013. The pilot effort provided science resources for seminaries as they sought to equip future religious leaders with solid scientific information and with connections to scientists.

The initial results are appreciable. One seminary professor, Bill Brown, reported a “dramatic rise” in students' appreciation of science, describing activities associated with the project as “transformative.”

Brown, the William Marcellus McPheeters Professor of Old Testament at Columbia Theological Seminary in Decatur, Georgia, elaborated on the most recent campus science events undertaken as part of the project. “We've had the best attendance yet among our students, followed by both formal and informal conversations…In short, it seems that a sense of wonder about science is being cultivated on campus.”

To most effectively connect with seminaries, AAAS partnered with the Association of Theological Schools, an accrediting association for graduate schools that train clergy. The pilot project, involving 10 seminaries representing a wide variety of Christian religious traditions, was designed to help professors incorporate relevant science into at least two of each seminary's core courses. The participating schools also set out to organize at least one campus-wide event each to explore the relevance of science to theological education.

By the most recent count at the close of the pilot project, more than 116 courses across the pilot schools had been revised, and at least 77 related events took place. Similarly, 137 applicants vied for 37 spots at related summer retreats designed to engage new seminary professors beyond those from the first 10 pilot schools. Perhaps most importantly, the project brought practicing scientists and seminary professors together to sculpt the most effective ways of conveying scientific advances and relevance to students.

“We were pleasantly surprised by the wide range of science topics that seminaries chose to explore, including cosmology, genetics, neuroscience, paleontology, and more,” said Jennifer Wiseman, the director of the AAAS Dialogue on Science, Ethics, and Religion (DoSER) program, which led the effort. “We were also pleased by the large number of scientists who were eager to get involved with the program, by, for example, giving guest science lectures in seminary classrooms and developing relationships with seminary professors.”

Last summer's retreats brought together pilot project faculty and scientists with representatives of additional theological schools, providing a venue for sharing insights and strategies. After being introduced to Science for Seminaries at one of the retreats, Beth Rath, an assistant professor of philosophy, went back to Borromeo Seminary and offered a class called “What Does Science Prove?: Topics at the Intersection of Science and Religion.”

One of the students who took the class, Andrew Karpinski, said it helped him develop a new understanding of the science of evolution, which he had learned in high school, though feeling somewhat dissatisfied with the totally secular discussion offered in school.

Rath said Karpinski was among many in the class who came away with new insights.

“This was the first time I've ever offered the course,” Rath said, “and it has been hugely successful. The impact that the class made on the students was more than I had hoped for.” Rath added that the retreat she attended put her in touch with neuroscientist Nancy Adleman, of the Catholic University of America, who helped Rath incorporate scientific articles into a unit on free will and moral responsibility.

Others who attended have also begun incorporating science into their courses. Jim Higginbotham, associate professor of pastoral care and counseling at Earlham School of Religion, in Richmond, Indiana, has prepared a class on death and dying that will ask students to address the bioethical issues related to the end of life, to “create a critical dialogue” between the natural sciences and spirituality. Grace Kao, associate ethics professor at Claremont School of Theology, in Claremont, California, mentioned additions she will make to her Introduction to Christian Ethics course, such as discussing epigenetic alterations associated with war trauma for a session on war and peace, the science behind shopping and the ways that poverty can change your genes for a segment about economics, and an exploration of whether genes can predict a person's liberalism and conservatism for a session on religion and politics. Steven Studebaker, associate professor of systematic and historical theology and the Howard & Shirley Bengal Chair in evangelical thought at McMaster Divinity College in Hamilton, Ontario, is planning on including in his Protestant theologians class John Polkinghorne, physicist and Anglican priest, and Philip Clayton, philosopher of religion and science.

“The activities of the retreat cast a vision for what integrating science in the seminary classroom can look like,” Studebaker said.

As students at the 10 seminaries who participated in the 3-year pilot project experience the revised classes and campus-wide science-religion events, the schools continue to survey their reactions. The results have generally been extremely positive. 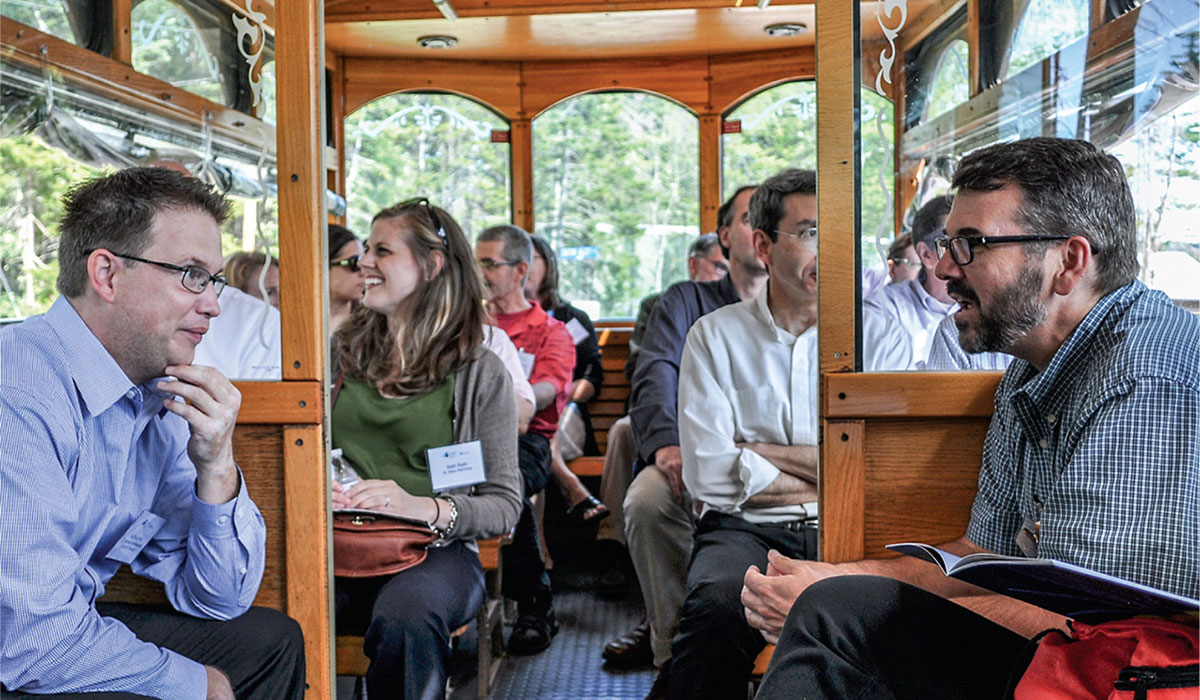 At Multnomah Biblical Seminary in Portland, Oregon, most students responded that they strongly agreed or agreed with statements such as “I recognize that scientific discoveries might have a bearing on how I approach life, work, and ministry,” the surveys showed.

In April, a 2-day religion and science conference at Multnomah received rave reviews.

“The conference was a refreshing example of dialogue, rather than war, between faith and science,” said Sara Mannen, Multnomah Master of Arts in Theological Studies student. “Recognizing our shared values of awe at the universe and desiring the good of society helped provide me with a starting point for conversations concerning faith and science.”

Almost all of the students at Wake Forest University School of Divinity, in Winston-Salem, North Carolina, said they had enjoyed science education opportunities including public lectures by scientists such as cosmologist John Barrow and science field trips such as to the Kennedy Space Center, said Associate Professor of Christian Ethics Kevin Jung.

Given the impact of the pilot Science for Seminaries project, DoSER is expanding the effort to assist seminaries, which is seen as an opportunity to affect public understanding and support for science—and the degree to which science can benefit society, a mission of AAAS.

“There were many more interested seminaries and seminary professors that we could not accommodate in this initial pilot project,” said Se Kim, associate director of DoSER. “We'd like to provide science assistance for more seminaries and will also continue to help interested scientists get connected to seminaries interested in their scientific expertise.”

In offshoots of the program, DoSER is now working with continuing education programs for active clergy at four institutions, and is assisting two Rabbinic training institutions with their efforts to incorporate science.

Meanwhile, as the pilot seminaries build upon their initial efforts, they are sharing with other seminaries resources they have developed so far, such as revised syllabi, via the project website: scienceforseminaries.org. Additionally, AAAS has produced a series of discussion provoking films for classroom use, called “Science: The Wide Angle.” The film series features 14 of the world's leading scientists and three historians of science discussing exciting scientific advances—and their own wonder and amazement as they explore our world.

As for enduring impact, Professor Jung quoted one of the Wake Forest students asked about the experience of exploring science as part of a religious education: “I think it will resonate for many years,” the student wrote, “as I continue to dig deeper into the issues of my congregants.”